Welcome to the first addition of our new regular “something for the weekend”, unleased on Fridays, the post will be comprised of our favourite picksavailable at that particular moment. Sometimes putting together collective outfits along with other worthy mentions from lifestyle, tech and events. The showcased products could be new releases or items which look oh so more attractive now they’ve hit the sale.

In addition we’ll give you a brief historical overview of each brand as-well as where to find the items instore/online. We hope that this can become not only a firm favourite of yours but an indicator as to current trends both high end and high street but a chance for you to get your brand knowledge up week by week.

denim capital of Kojima, Kapital originally began in 80’s. Founded by Toshikiyo Hirata. Through his fondness of American denim whilst teaching in the US, Toshikiyo came back to Japan with a clear goal to produce his own denim.

Since opening his first factory in 84, Toshikiyo has built Kapital into an authentic body. Its Japanese heritage combined with western references are a common theme from collection to collection and something which has helped sustain the brands its test of time.

Maintaining its heritage, Toshikiyo’s son, Kiro is now the Head Designer for the brand after working for popular brand 45RPM for a number of years he made the jump to join his father. Speaking with Heddles:

The Jacket above boast’s a blend of paisley and bandana prints, a nod to the brands on-going relationship with western culture. The jacket fits small due to the tailored shaped, sizes are limited and already low online atMr.Porter!

Kapital is stocked in many brand-owned stores in Japan as well as Yoox and Net-a-Porter.

The One-Star has seen a meteoric rise is the last few years. Previously most known as a skate/casual shoe. It has blown up to be a close rival on the chuck-tailor as a wardrobe essential.

This is due to the model laying the foundations for many lucrative iterations with many influential figures and brands putting their stamp on the silhouette.

The most hyped link up coming from  Tyler the Creator with his ‘Golf le Fleur’ line and has now formed an on-going creative partnership with Converse including apparel due to its commercial success.

Converse was founded in 1908 by a Mr Marquis Mills. Originally called the ‘Converse Rubber Shoe Company’ it began producing

rubber soled shoes with a canvas upper and was mostly worn as a casual/sports shoe.

The brands initial rise to fame came around 1920 when they renamed their basketball shoe the ‘all-star’ which was swiftly followed by an endorsement deal with basketball player Charles ‘chuck’ Taylor.

Since this pivotal moment the Chuck-Taylor has become a household name seen on almost every fashion icon with the most notable loyal wearer being   Kurt Cobain.

In 2019 the Chuck-Taylor is the most recognisable silhouette around. Due to its simplicity much like the new kid on the block the one-star, it is easily adaptable to allow for collaborations such as commes des garçons or more recently J W Anderson.

The One-stars above complement the Kapital Jacket to allow for either a contrasting or blending lower pallet. 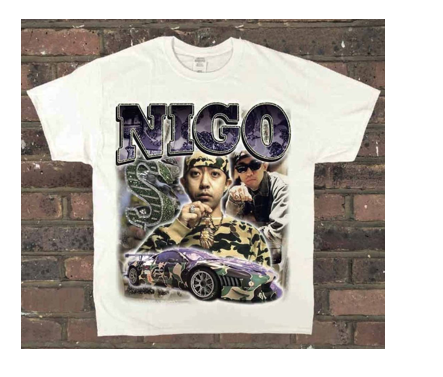 Continuing the un-intentional theme of Japans key fashion figures, who better to get as the final clothing item than the streetwear king himself Nigo.

Nigo is responsible for many streetwear projects but widely known for his creation of ‘A Bathing Ape’  more commonly knows as BAPE.

This T-shirt is from Homage Tee’s a brand born in the Summer 2016 with the pure purpose to celebrate our icons. It’s very cloak and dagger when it comes to the owners of the brand.

However in an interview back in 2017 with I-D mag, they stated:

”We don’t disclose who we are, as we want all the focus on the people we pay homage to, they deserve the shine we are just doing a service to our people. We’re Londoners born and bred.” A refreshing statement to hear indeed.

Basically a shed load national treasures who I agree, do deserve as much celebration as humanly possible

Overall all of the T-shirts have a common theme, an entire custom print of the icon and other items of their time added for the full mise-en-scene.

The T-shirt’s greens matches nicely with the earthy tones of the needles track pants to further create cohesion for the full fit.

Awake New York, originally began in 2013 selling 6-panel caps. Serving as a side project personifying the spirit of New York, Owner Angelo Baque was the Brand Director for Supreme at the time of creation.

Since leaving supreme in 2017 Angelo has set up his own creative agency ‘Baque Creative’.

Since this date he has also been able to focus more on his own brand and now Awake NY has grown steadily in the last couple of years. Widening its product range to include outwear, Accessories and signature logo hoodies.

In addition to its upper level of quality clothing items, Awake’s logo is distinct and extremely pleasing on they eye something which I’m sure has contributed to its wide success.

The brand is now stocked globally, with stores Dover Street Market likely being your best bet. Other UK stockists include ; Patta, Good-Hood and The-Hip-Store.