Over the years Paris has built up an envious and undoubtably strong reputation for offering a showcase for brands that offer balance between commercial awareness and an edgy sensibility. It is able to house brands as diverse as the Gallic Powerhouses of Dior Homme, Louis Vuitton, Givenchy and Hermes. While at the same time attracting international big names such as Paul Smith, Thom Browne, Valentino and Issey Miyake. All the whilst nurturing talents including Ami, Umit Benan, Christophe Lemaire and Raf Simons. So to commence proceeding we begin with what has to be the leading trend of the Parisien shows, the altered imagery of proportion.

Y-Project and Rick Owens were key players of this look, playing with proportions and sizes. However, it was Raf Simons who did it best, but between Rick Owens and Thom Browne surely they must steal the crown for senting out the most random looking models. Owens sent his out with their faces painted white & black out eyes and if that wasn’t scary enough, Browne’s looked as though they were auctioning for a new Dr Who Monster with Bowler hats acting as masks. Nonetheless, getting back to the clothes on show Simons and, new kid on the block, Sacai played with the same proportions and materials but went down a more dishevelled Preppy tip.

The nature of the Fashion beast is its ever consumption of trends and as it gives birth to a new one we lay to rest another. This was well and truly evident as we wished an RIP to the skinny look, when that Bastian of all things svelte, Dior Homme ditched its skinny jeans for a far more biasly cut silhouette, surely now is the time for us to do the same ?

Meanwhile over at, Louis Vuitton, Kim Jones really does go from strength to strength with his reinvention of the classic French Luxury house. Paris has in recent months seen its fair share of hard times and this season Jones decided to write a love lesson to this City he had called home for the past five, yes it’s been five, years. Offering his unique take on Parisen culture both new and old.

Another grand name with an enviable heritage showing over the session was Cerruti where Jason Basmajian delivered his first collection as Chief Creative Officer, of the house, and what a genius stroke it was, in offering us everything a contemporary man should posess in his modern wardrobe from work to play.

Another trend we saw emerging was seen at Dries Van Noten and Balmain who offered us there take on a Mystical, magical, military. Dries opted for a little more Mod in his interpretation. Whereas Olivier Rousteing’s Balmain went for it in a tad, how can I put this, well, Adam Ant’s Prince Char-Ming. 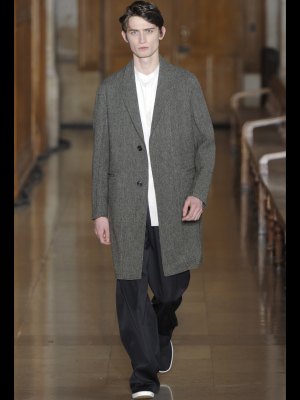 From one extreme to the other, as it’s been said that brands the like of Hermes, APC, Christophe Lamaire and Ami merely produce clothes and not Fashion, as they aren’t swayed by the trends and foibles, of this world they exist. Almost as a statement of, well they don’t deserve to belong here during a Fashion Week. Well if this is the case, please carry on as when brands produces ‘clothes’ as simple and beautiful as these, you can keep your Fashion or Fadhion trends. Stand out has to be Lemaire, who displayed a highly wearable, sensible but unbelievably stylish collection.

The theme for Ricardo Tisci for the house of Givenchy this season was ‘Freedom’, so he tried to unchain some of the shackles of restriction that Fashion designers must feel in trying to fulfill their job spec and yet meet the ambitions of the Fashion house bigwigs. He mixed Formal with Casual and vice versa, mess with traditions and conformities.

Then we have Kenzo who had more than a wiff of the 90’s about it. Designers Carol Lim and Humberto Leon were inspired by a Blur Gig they attended back in 1995 in Toyko. But it felt a lot more in keeping of Manchester’s Student Mecca, Afflecks Palace than the intellectual pseudo-Mocknies of Blur. From the unique patterns of this collection, reminiscent of the ‘going out’ tops sold in Afflecks to the rave culture accessories on offer and of course the Madchester Flares the models sported. Maybe the Inspiral Carpets blend of indie psychedelic pop was more apt inspiration, maybe ?

Finally we have a designer who just refuses to be pigeon holed,  in Sir Paul Smith. As much as his customers cross the full spectrum from saint to sinner, his collections tend to fail to fall into the categories of trend, whatever they may be, this season was a heady eclectic mix of colour, dinosaur prints and every material from cashmere to lurex, which should be pointed out, did work very well as a coherent collection.