For the Fall 2018 season, Nike is releasing its latest futuristic Tech Pack collection. With new styles and materials, the pieces use innovative knit and woven fabrics that are engineered to provide a full range of motion. This new collection allows for more expressive connections to the sport; through breathability, stretch and texture.

Nike Sportswear’s latest Tech Pack collection spins body-informed and environmental data into focused and functional forms. The collection uses knit and woven materials as well as base, mid- and outer layers engineered to provide athletes with a full range of motion. “The product is engineered to the body through innovative and expressive materials that allow for stretch and breathability,” says Senior Design Director Ricky Hendry. “We wanted to redefine Tech Pack as more of a head-to-toe collection, introducing new styles and materials, allowing for a new and more expressive connection to sport,” says Hendry.

Nike Tech Pack will be available in North America and Greater China August 1 and globally August 16.

Supreme, as I’m sure many of you know, has dominated the streetwear fashion scene for a while, with the cult following increasing dramatically in the last couple of years. However one of the originals in the Supreme game Ross Wilson has opened his vault to the public boasting 1,000 plus garments and accessories, with 841 pieces available for the public to buy at Online retailer The Idle Man.

Ross was first introduced to the brand in 1994 on a trip to New York, where he was cruising around looking for a skate store when he happened to stumble upon Supreme, this was where the unintentional collection began, becoming one of the greatest Supreme wardrobes ever. The collection spans back to 1994 and contains everything from; Box Logo’s, Skateboards through to The North face Collaborations and friends and family items, showcasing a timeline since the birth of Supreme in clothing. 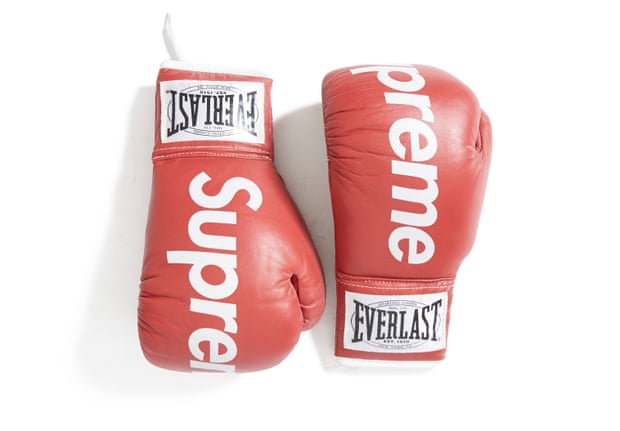 The Idle Man retail store in Leather Lane, London will open to the public on the 2nd and 3rd of February, presenting the exhibition to the public containing some of Ross’s favourite items from previous years and will allow newcomers to the streetwear world to experience the heritage of the brand. We were lucky enough to get a preview and one on one interview with Ross and here what he had today! 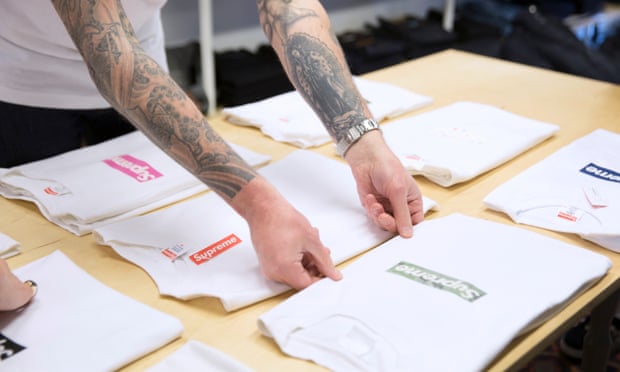 Who’s your inspiration in fashion?

‘I don’t necessarily have a celebrity influencer, I get inspired by the places I go to and the things I do. I’ve skated since I was a kid and it always been about freedom of expression in dressing and skating.

I’ve been a club DJ for a long time and I feel if you’re open-minded when it comes to music then your open-minded in fashion.’

Thoughts on the youth culture of Supreme?

Good on them, I say. If they’re passionate and believe in it goes for it. One of the reasons Supreme resonated with me was because everyone wearing it was in to what I was. If Supreme puts an older celeb on t-shirts, these kids are that enthusiastic about the brand they will research into them and this opens there eyes and they’ll begin to listen to their music, which is really cool in my opinion.

Your favourite Supreme item ever?

‘I’m actually wearing it now, funnily enough, The Hanes tee as its something which can be thrown on every day and the cut for me is just perfect’

Do you collect anything other than Supreme or Plan on?

‘I never actually planned on collecting Supreme it was just something I liked and stuck with and over time got a lot of it. I like other things such as skateboards, trainers and records, however, the aim of a collection is to get everything and that isn’t my aim.

What are your thoughts on the term Hypebeast?

I mean good for the brand hype beast, but I feel it’s now a derogatory term, it’s thrown around far too easily, yes some people do give into hype, but I saw someone comment on one of my posts saying ‘look at this hypebeast’ and they clearly just don’t understand the meaning.

Would you still buy Supreme in the future?

Yes, I love the brand, for me its up there with one of the greatest men’s wear brands ever with Ralph Lauren, A.P.C, I don’t care who wears it if they make interesting and creative products I’ll wear it.

Shop the collection at http://www.theidleman.com/supreme

Every man in Britain has, at some point in his life, been part of a team. Whether at school, in a club or perhaps through a sub-culture movement –Mods, Punks or Skaters – teams are part of modern tribal society, defined by a uniform and a dress code. It is how each team-member interprets these codes
to express individuality and personality that became the inspiration for Kent & Curwen’s Spring-Summer 2018 Collection.

Looking at images from past decades of Oxford and Cambridge sporting teams, Creative Director, Daniel Kearns and Business Partner, David Beckham were particularly interested in the way those gentlemen mixed items of clothing to make a sartorial statement. For inspiration they also explored archive
imagery from the 1948 Austerity Games in London, where British Olympians were required to provide their own kit, thereby defining their own national uniform, united by the Union Jack badge worn by all.

For this season, the brand took the traditional British summer dress codes and adapted to bring an edge to a gentleman’s wardrobe in the modern era. This is a collection of respectful yet re-imagined sportswear that blurs the boundary between old and new, worn with a British nonchalance. Oversized striped and brocaded Regatta Blazers in silk and cotton silk, badged with the 1926 Rose of England, is dressed down with a mismatching college scarf, tennis shorts, long striped socks and plimsolls or up with matching trousers, a frayed-edge cardigan and detachable collar shirt for a decadent, sporting take on deconstructed tailoring.

Cricketing attire, the foundation of the brand in the 20’s and 30’s, is referenced through a more creative lens. The cricket jumper is re-imagined and refashioned as a seasonal statement or presented as frayed-edged and lived-in like an old locker room favourite. Cricketing trousers morph into track-pants worn wide and long with tennis shoes for a decisively informal silhouette.

Shop the collection now at Kent & Curwen and Mr Porter

As we continue to take more and more care of ourselves, both body and appearance, it’s no surprise that retailers are tailoring their products towards this trend. We however here at Clothes Make The Man don’t believe that this is a trend, but a growing example of the modern man and the pride he takes in taking care of himself.

As we’re on the topic of conversation about growing, let’s talk facial hair. There is most definitely a blurred line between looking smart and scruffy with facial hair and often when the occasion requires, it’s time to smarted up and check that neck line.

Braun are a much loved player in the men’s grooming game and we have them to thank for some truly great products that have kept us looking our best. With the recent release of it’s new Beard Trimmer, Braun have taken the time to help us gents smarten up, whether that may be for an interview, business meeting or a date night down your local bar.

The Braun BT3040 is a precise and effective beard styling tool with 39 length settings for ultimate control. It gives you the opportunity to pick and chose the perfect length to suit your requirements, face shape and occasion, so you can always guarantee a smart and well kept mane.

With this release, Braun has shared some great tips for smartening up your stubble, whatever the occasion;

First, allow your stubble to grow a little but longer than you’re aiming for to gauge coverage, then trim back to 5mm using the Braun BT3040 Beard Trimmer.
After trimming your stubble to a uniform length, clean up the edges using the Precision Trimmer attachment. It’s recommended that you use two or three fingers width and extend past the jawline for a more flattering look, then completely clean up the neck line from the Adam’s apple down.

For a short stubble look, create a neat line and cheat the desired cheekbone definition with the Contour Edging blade. Make sure you use your finger and place it against the skin to ensure the line is straight.

Lastly, if your beard connects with your hair behind your ears you should always separate the two. It’s small details like these that separate the men from the boys and keep that stubble looking designer, rather than discount.

If you’re looking to smarten up and keep that facial hair tamed, this might just be the perfect option for you. Braun also produce a really great range of men’s grooming tools and products so if you’re interested, you can see the full range here. Have any tips, tricks or questions you’d like to ask? Get involved and leave us a comment below!

London based brand/shop Garbstore have released their new AW17 men’s collection, Garbstore takes reference from the early 1900’s British newspaper ‘Sunday Dispatch’ to create a collection that pays homage to WWII’s soldier’s uniforms and casual wear in the poignant post-war period. Oversized silhouettes and boxy shapes are reminiscent of surplus military clothing after the wars and provide an extra layer of authenticity to the collection. Enzyme washed garments and Japanese reproductions of vintage cloth allow a true sense of a newly constructed past. Vintage sportswear is reinterpreted in hardwearing materials, elevating it to a new level.

The Bren Vest, which pays homage to military wear of bygone years is layered with our Classic Flight Shirt for a true utilitarian look. Hiking influences are introduced through discreet detailing and fabrications. The APS Trench – a fresh take on the sartorial classic, is reinterpreted the Garbstore way with the addition of sportswear pockets and playful proportions. Japanese craftsmanship and materials continue to play a profound influence and are evident in the Easy Hoody – cut using a Kimono pattern, whilst the Tomo Jacket is inspired by American military and Japanese service wear.

Innovative techniques for knitwear are employed for the first time. Garbstore has worked with an English mill to twist yarns especially to create a static effect as seen in the Tri-Boston Sweater and the newly launched range of socks, made from alpaca for the ultimate in comfort.

For AW17, Garbstore has collaborated with Japanese accessories brand Sanpak to re-create three exclusive styles. Going since the 1950’s and supplying the Japanese Forces all the while, Sanpak bags utilise military spec nylon and hardware. The Garbstore x Sanpak capsule collection takes original 1970’s silhouettes and re-imagines them in modern tonal suede and Cordura nylon.

Situated in the heart of Notting Hill, Garbstore launched to critical acclaim in 2008 as is now firmly established as one of London’s best menswear shopping destinations. and as of September this year, the expansion of the brand has seen the opening of Garbstore.ten, a store located in London’s Seven Dials which was created to celebrate a decade since the brand’s inception.

Shop the collection online or in store now!