We start 2019 with some very sad news that in the breaking days of 2019 we loss a creative menswear colossus in Joe Casely-Hayford. As a mark of respect for today’s post we are running our interview with Joe from 2013. Journalist Tom Stubbs summed up this sorry situation in such a succinct fashion when he put it, on describing this sad news as;

”It is so very sad that Joe Casely-Hayford has died and so young. I usually don’t do RIP’s on an I.G. feed that’s about men style and people, but Joe Casely Heyford O.B.E was all about men style and people, so have to mark his passing. Joe was sublimely elegance in both style and manners. Also kind, cool, creative and funny – a rare mix in life, let alone our industry. My thoughts and feelings go out to Joe’s beloved family.  I am so glad to have seen Joe this autumn at the opening of the Casely-Hayford shop on Chiltern Street. A true family affair just like how Joe did things, far beyond the strong create a partnership with son Charlie. Family around him recounted how 2018 was a big year Joe aside from the shop opening, with the family wedding and an engagement and his granddaughter starting school. I am blessed I shared Joe’s repartee again that night in October on art, style and the street and recall he was always so quietly charming and generous with his words. Joe talked about and crated style in a uniquely erudite and instinctively modern savvy way. I interviewed Joe Casely-Hayford a couple of times, and also worked with his men’s style stuff, and so much of it was memorable. He once called Ariston ‘a very sexy mill’ during an interview. No one talks quite like that about clothes now, let alone back then. Joe strongly influenced me.  with the LFW man’s international shows we must solemnly note that style, London, the world is a very special man down.

Joe Casely Hayford OBE has dressed some of the most iconic and stylish musicians from over a generation, which include The Clash to Tenie Tempah. However, this only accounts for a tiny proportion in this man’s long and illustrious career.

After, he graduated from St. Martins,

Joe’s  signature style of combining innovation and impeccable tailoring fast developed which soon caught the eye of leading publications of the time, i.D, The Face and Arena.

Incidentally,  a little known fact is that, Casely-Hayford was one of the first designers to make the cross over and collaborate with a high retailer on an exclusive collection, back in 1993 for TOPSHOP !

He’s contributed definitive pieces of work to many fashion and art related exhibitions internationally as well as being the subject of exhibitions himself.  “Through the Ages”, a retrospective of Joe’s work was held at “The Edge” space in Tokyo, September 1996.

In 2005, Joe’s sartorial vision was cemented during his successful tenure as Creative Director of the 200 year old Savile Row house, Gieves & Hawkes, taking it and opening it to a new global audience by showing during Paris Mens Fashion Week and credited as a major step in bringing the illustrious company into the 21st century.

After a four year break, Joe returned to the industry with a new signature Menswear range, Casely-Hayford in partnership with his son Charlie. The brand ethos is built around a theme of English sartorialism and British Anarchy. So without further ado let’s see what the good man has to say for himself;

How did you get into the industry, what was your big break?

I studied at the very formal Tailor and Cutter Academy before attending the slightly” less” formal St. Martins. My first collection was based on a recycling concept. I made clothes from Second World War tents which became quite popular.

What is you most memorable moment ?

From the point of view of recognition, I guess receiving an OBE from the Queen is up there with the first time I saw my wife at St. Martins.

What track would always get you on the dance floor ?

I’m a dancing machine (in my head) there are too many tracks to even consider; this changes daily. Today it’s The Invisible “Wings” remixed by Floating Points.

Who would do you ideal diner guest/s and why ?

Tony Benn, will Self and Christopher Hitchens would interest me for their intellect and wit. Some of my ancestors would be good to talk to. I had an Aunt Gladys who was a poet, she walked with a limp but this didn’t deter her from joining a dance troupe in the Weimar republic.

In your own words what is you’re SS13 collection about?

It’s called phantasy in Tokyo and draws a comparison between the freedom, vibrancy and openness of 90s rave culture in the UK  and the deep contemplative nature found in areas of Japanese culture at the same time.

What is your favourite piece in the collection?

Naturally I love the whole collection. In particular the oversized silk parka and also the hybrid pieces we’ve become known for, such as the half shirt half jacket or half Polo shirt half formal shirt.

If you could have invented anything what would it be?

If you had one day to live what would be your biggest regret?

Each morning I set out to achieve my best at whatever I’m doing and to treat others with respect. Hopefully, if I can continue this until that fateful day I shouldn’t have any regrets.

I am inspired by living in London.

Who is your style icon ?

My father was pretty stylish. He had exquisite taste which was outside of fashion.

Have you ever bought a piece of clothing and regretted it ? If so what & why ?

I have a shoe fetish, and have on occasion impulse bought ill fitting shoes. Rather than throw them out I tend to forget how painful they are until the next time I wear them.

If you could collaborate with one brand (Who you currently aren’t) who would it be and why ?

I would love to be given the opportunity to develop a range of future tailoring with a forward company like Nike, combining my Savile Row experience and knowledge of sportswear with Street style.

Good Day folks, the start of yet another week and another sartorial dilemma arrives for me, this time via our Facebook page and following my piece on the launch of the Inspired by Savile Row Range by Richard James for Marks & Spencer. This inspired a young man to contact us to seek stylistic advice; 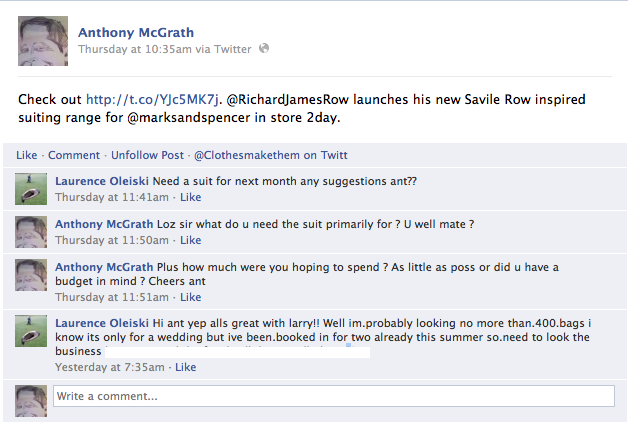 As always Loz and like anyone who drops us a line searching for guidance, thanks for taking the time out, we appreciate it here. Now then, you have at least two weddings coming up and you, “need to look the business” and you are looking to spend around the “400 bags” (£400) mark. OK right off, you were obviously impressed with the Richard James collaboration with Mark & Spencer, as seen here last Thursday as that’s what drove you to seek my help and right you are too. Richard James is a Master Tailor and as mentioned in the post, has dressed everyone from Messers Liam & Noel Gallagher to Sir Elton of John. For this range he was very hands on and personally oversaw each detail of the collection. So I would certainly recommend take a look at www.marksandspencer.com/Savile-Row-Inspired-Mens/b/1634465031

Furthermore, as the suits costs in the region of £349, have it slightly altered to fit you perfectly to ensure you, “look the business”. Larger M&S stores offer alteration services or sort a local TRUSTED tailor, but remember to give enough time before the big events. 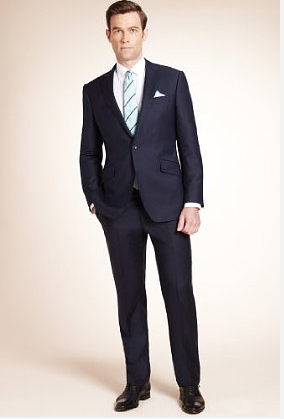 So this brings us to the next retailer, Moss, this brand has over 160 years of experience in tailoring and are somewhat of a forgotten quantity on the British high Street today but with approx 150 outlets nationwide, they know a thing or two about suits and how to make a decent one. They offer a bespoke suit service, which currently has an offer, where suits start from £299. Plus, if this doesn’t flow your suiting boat, for some unknown reason, they also stock quality suits from Calvin Klein to Zegna to Ted Baker & French Connection. You can’t say fairer then that and this will have you putting the groom to shame in the dapper department. www.moss.co.uk

Lastly,  in researching for your quandary Loz, which was difficult, I don’t mind admitting, but I was far from beaten. £400 is a good price to pay for a suit,  but  a lot of designer brands just fall outside this price bracket, so we had to discount the Hugo Boss’s, Paul Smith’s, Nicole Farhi’s etc. But while investigating on your behalf I came across two great finds, one, a suave piece of tailoring by the tres talented Irish man Paul Costelloe. He offered an air force blue coloured single breasted suit over at House of Fraser, but this lil number beat it by a nose and it’s by the dapper Mr Joe Casely Hayford exclusively for John Lewis.

Now before, I forget, you must remember not to fall at the final hurdle Loz and the devil is in the detail when one wants to, “look the business”. Always wear good quality, high polished shoes, finish the look with a pocket square as seen above, be as discreet or flamboyant as you want, but go for it and if you can’t tie a good knot, ask someone who can, untidy sloppy tie knots ruin the look you’re trying to achieve. Ohhhh and by the way, between you and me, there are some great bargains to be had in the mid season sales at the moment, so if your quick you can pick up a tidy lil number making your buck stretch a lot further, but purely between the two of us.

So Loz, all that is left for me to do is to tell you, the choice is yours ??? Let us know what your decision was and join us again next Tuesday for another style clinic.